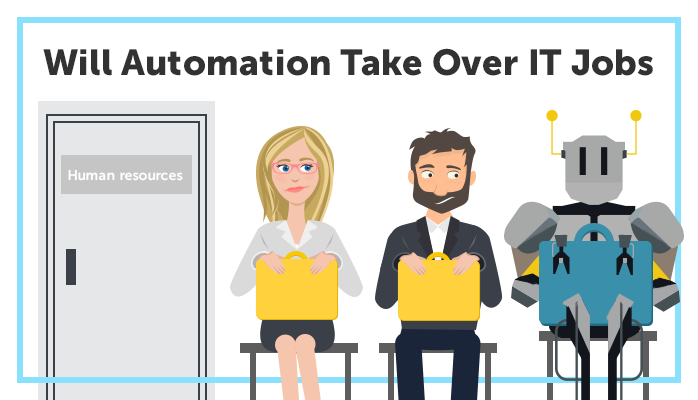 Being left obsolete due to incoming power of automation is a common fear among the IT pros community. Especially with all the media stories about the rise of neural networks and AI that pop up almost every day, it’s really tempting to jump on the hype train and start the panic. So, will all the admin jobs eventually be taken by robots?

When you hear the stories about DeepMind’s Alpha Zero thrashing not only the best human payers, but also the best programs at chess, shogi and go, or when you hear about Microsoft’s neural network that’s successfully testing software for vulnerabilities, it can be really scary. Especially taking into account that a lot of major advancements have happened in the past year or so. Thus, it’s more than reasonable to assume that all that will eventually get to the IT sector, right?

We’ve already been there

Humans are often very egoistic. We always want to be special in some way. We also want our time to be special. We like to think that most of the things that are happening now are somehow fundamentally different from the things that were before us. But the truth is that they are not.

Machines actively taking over human jobs isn’t new at all. For the past centuries we’ve been through three major industrial revolutions. Each time there was a lot of fear that we all will be left unemployed. Each time that fear failed dramatically.

The only thing that’s really changed is the adoption speed. It took over 40 years for electricity to become a widely adopted technology a century ago. Same process took things like smartphones or social networks less than a half a decade.

And if you look closely at the IT sector, you will see that it has been susceptible to automation throughout the whole time the industry exists. And despite corporate IT often being a sort of a slow-ish dinosaur, it’s pace is still very high. Look, for example, at Office 365, which was introduced in 2011, just 6 years ago. Now a lot of enterprises have hybrid environments or even move to the cloud completely.

New technologies are constantly introduced, replacing the old ones and automating the tasks that were previously done manually. But that doesn’t mean that the IT pros, who are managing those technologies are becoming irrelevant.

You can think of the IT needs of your company as a To-Do Pyramid that you need to fill. Much like the Maslow’s pyramid of needs, you can’t move up unless you have the bottom levels filled in.

So, when automation comes into play, it doesn’t replace things you do manually. It fills in the bottom levels, helping you to move up and take care of the upper levels of the pyramid that you couldn’t reach otherwise. Automation is not the destroyer of your job. It’s an instrument that can help you move it to the next level.

A lot of what you’re doing now in your IT position will eventually be taken by automation.

Will IT pros become obsolete because of that? No.

The whole point of IT is that there’s always plenty of headroom to move further. New technologies always open new boundaries. So, unless you’re just a monkey trained to push the right buttons, you won’t be redundant as an IT pro.

As Dr. Autor from MIT points out in his research about automation and its influence on the job market, introducing automation actually makes human skills much more important. The human part becomes significantly more critical to be done right, therefore the value of it just skyrockets.

Don’t Be Afraid to Use Automation

Automation isn’t something that you should be afraid of. It’s going to replace your current functions, but it’s not going to replace you. You will have to adjust and shift to more cognitive demanding tasks that involve more ideas and decision making rather than executing sets of manual tasks.

Besides, every automation system needs maintenance. Even the USS Enterprise needed Scotty to run the whole thing and Captain Kirk to give out orders, no matter how sophisticated and advanced the ship’s systems were.

Lastly, there’s another reason why you shouldn’t be afraid of automation. It’s inevitable. You can’t stop it from coming. That’s why you need to accept it now (if you still haven’t) and treat is as a base level, which you can use to climb up your pyramid of IT skills. Use it to learn something new, think of the next big thing you might need. No machine will be able to do that for you. That’s why IT pros aren’t going anywhere any time soon.