We’re finally ready to unveil our biggest release since the original launch of Adaxes!

The 2018.1 is a gargantuan update to the entire product, featuring major improvements both from the inside and the outside. A lot of things, such as the new Adaxes Web Interface, had to be redone from the ground up and even more were added as new features. It’s a very important milestone for Adaxes and we are excited to share the latest update with you.

The first thing you’ll notice in the latest version is the new Adaxes Web Interface. It has been practically redone from scratch, so there are a lot of new things to check out.

The Web Interface now features a gorgeous new design that lives up to all modern standards. It is now fully responsive, meaning it is optimized to be used on any device, including tablets and phones. 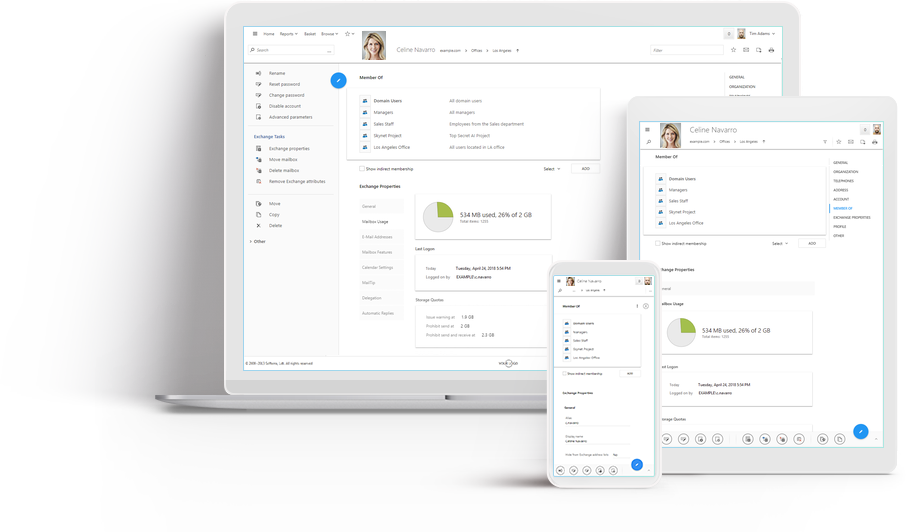 The new Web Interface brings a lot of improvements in terms of user experience that come with new features and enhancements. Here are the main highlights. 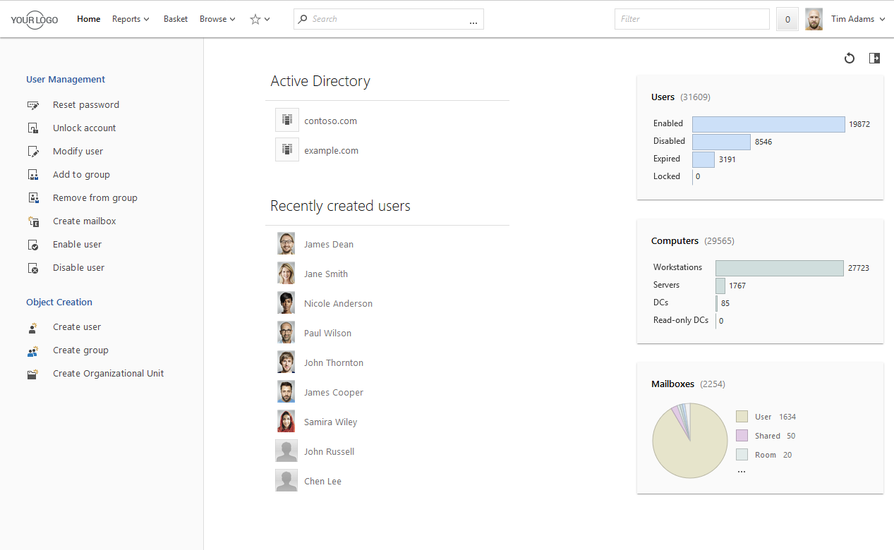 You can now add any number of content panes to give users quick access to the AD objects they need. Each list can contain specific Active Directory objects, members of groups and Business Units, objects located in specific OUs, reports, etc. 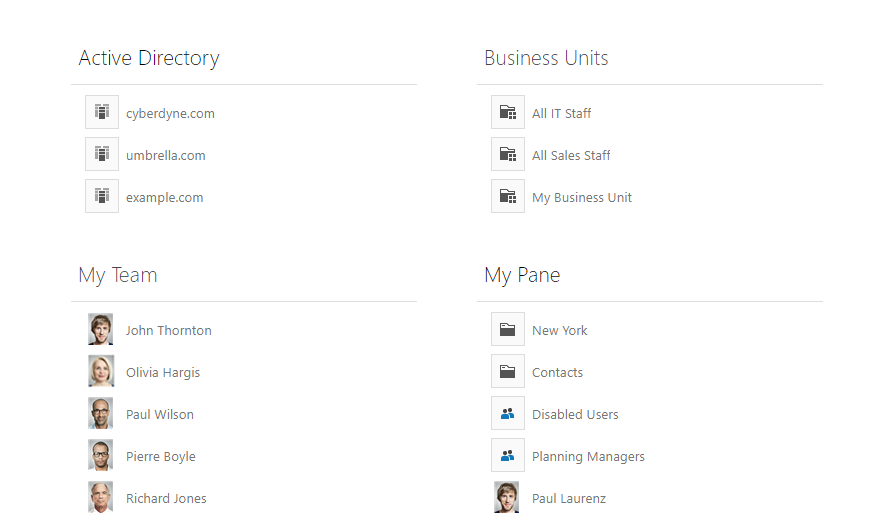 Learn how to customize the Home page

The Self-Service options in the new Web UI are now significantly improved. The top menu can now be customized to show the info of the logged in user and provide quick access to editing own account. Self-service cards, such as My Account, Password Self-Service and Change Password, can be added to the Home page. Also, you can now separately configure forms and views for editing own accounts. 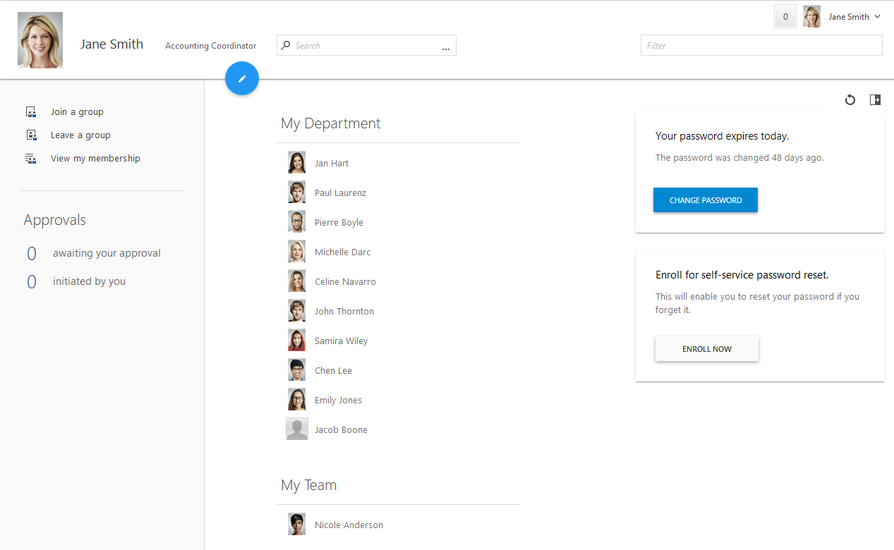 The Actions can now be accessed not only from the Home page, but from anywhere in the Web Interface via the

menu in the top left corner of the Web UI.

All actions are executed in separate dialogs, so you don’t need to leave the page you initiated the action on. 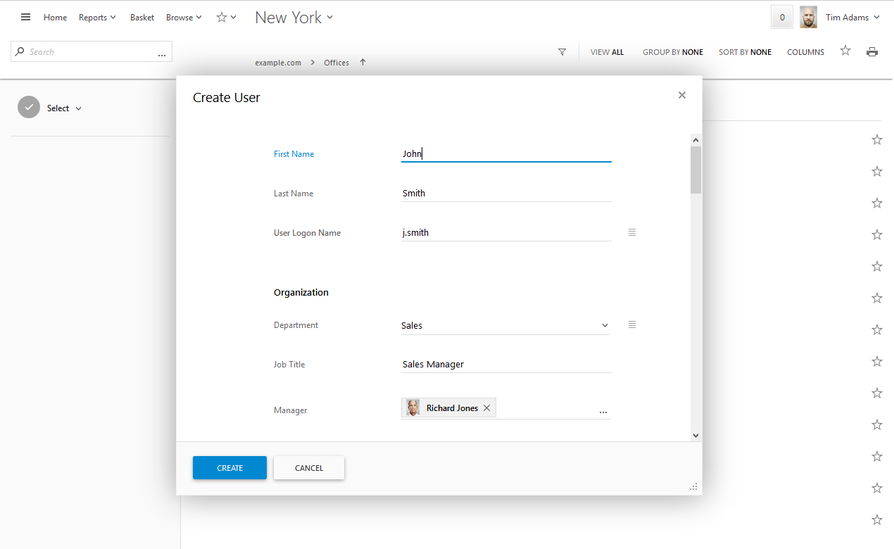 Learn how to configure the Actions pane

You can now limit what users can see when browsing AD, allowing them to view only the objects that match a specific filter, belong to a certain scope or are located under a certain top level node.

A new intuitive object selection interface is introduced throughout the entire web UI. It provides a convenient filter to quickly find the objects you need and view the selected ones as chips. 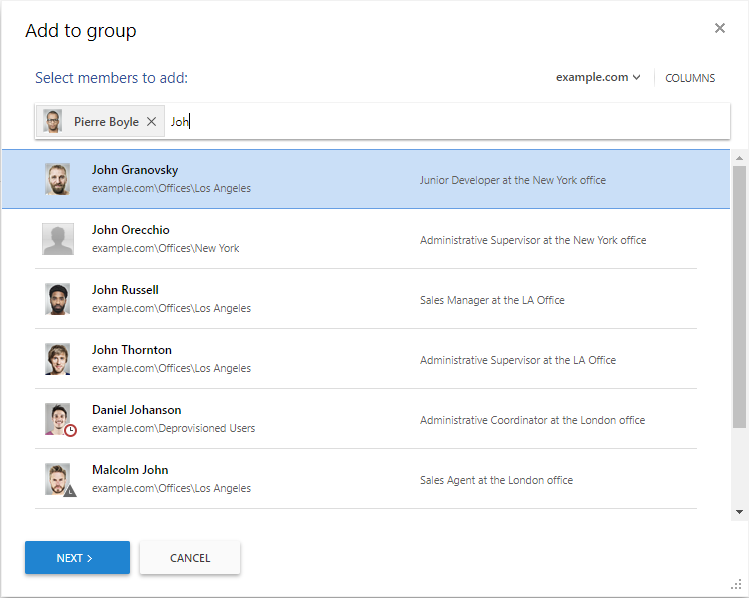 The latest version now supports pasting AD objects from the clipboard. For example, if you have a CSV file with a list of users that need to be deprovisioned, you can open the file in Excel, copy the users from there and paste them to the Deprovision operation in the Web Interface.

Grouping and filtering features are now available when viewing lists of objects. For example, when viewing objects in an OU, you can leave only the enabled users on the screen, group them by their department and apply your own filter to the list.

Adaxes now allows selecting multiple objects of the same kind with just a couple of clicks. For example, if you have a large list of AD objects, you can select all enabled users from it in one go. 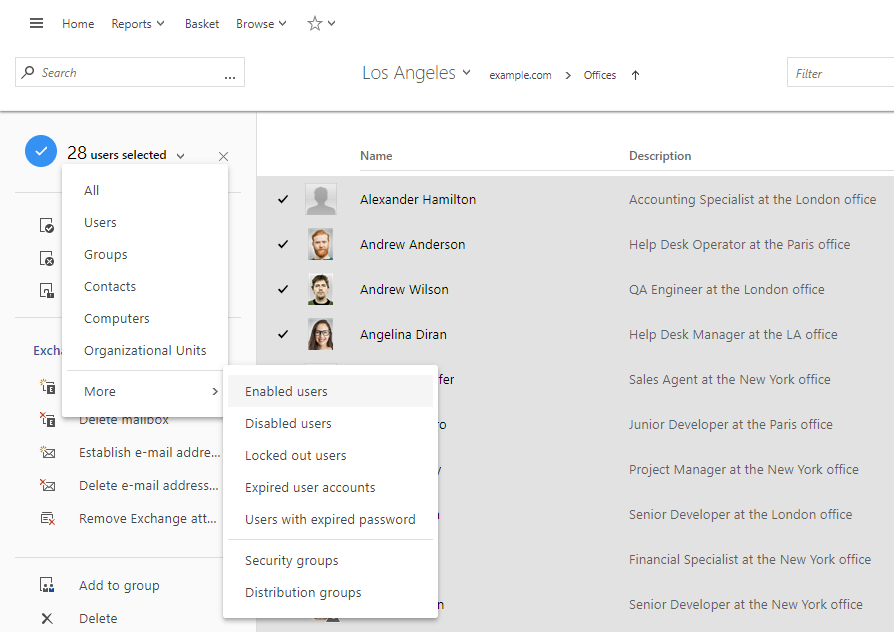 The Quick search now features IntelliSense, showing you the search results as you type in your request. 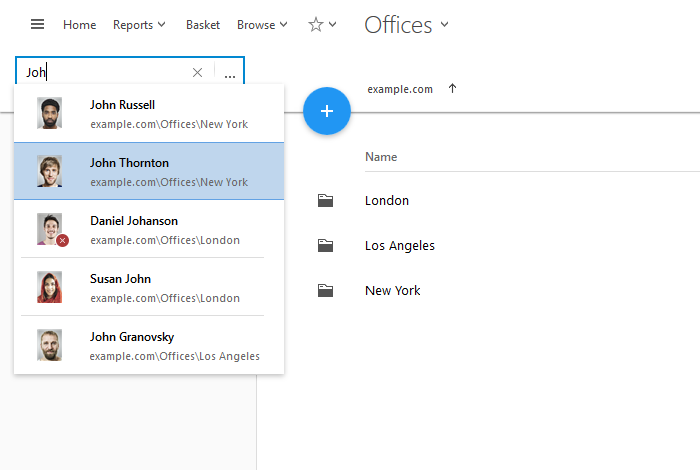 Popovers with additional information are now displayed for various AD objects. For example, when hovering a mouse over an OU, you can see all objects located under it and navigate to one of them without any additional steps.

When viewing AD objects, you can now edit fields in individual sections straight from the object view. For example, to change the user’s job title, you can edit just the Organization section without leaving the page. 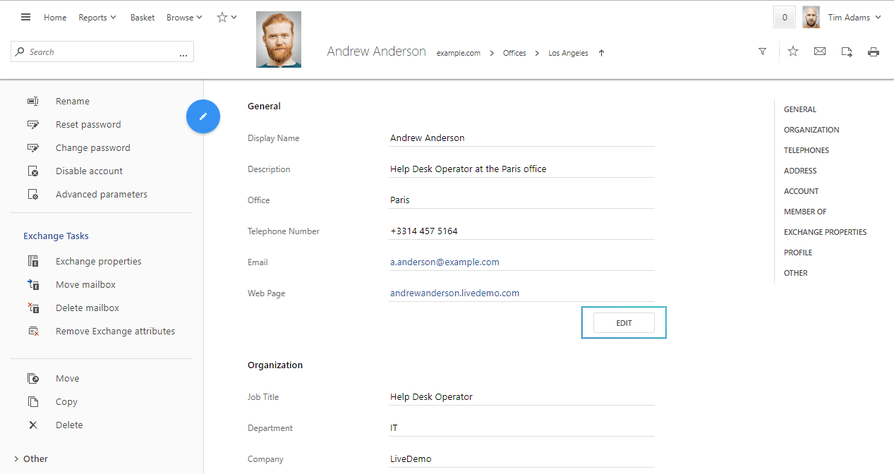 Learn how to customize forms for user creation and editing

A separate section containing child objects can now be added to object views in the Web Interface. For example, such section can be used to display bitlocker keys, printers or service connection points that are located under a computer object. 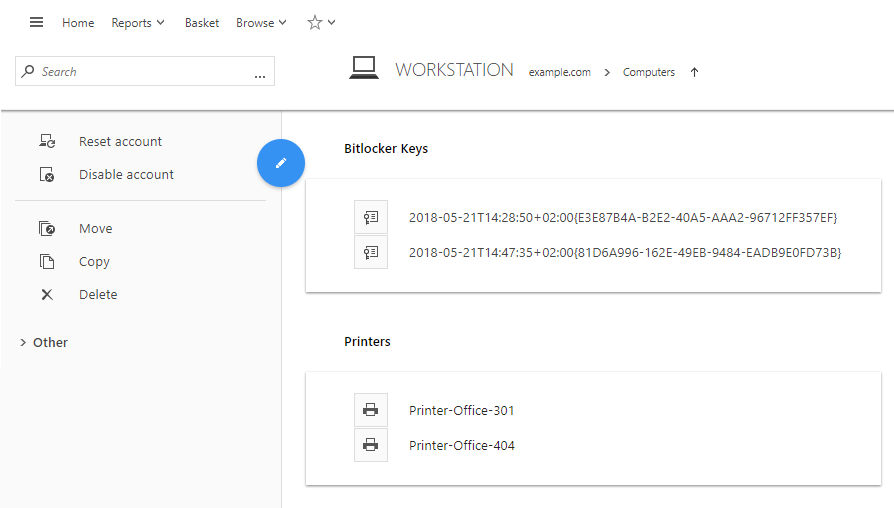 The Reset Password operation can now be configured to show only the User must change password at next logon account option and no other ones. Also, delegating rights for the operation is simplified, so that just the Reset Password permission is enough for such a configuration. 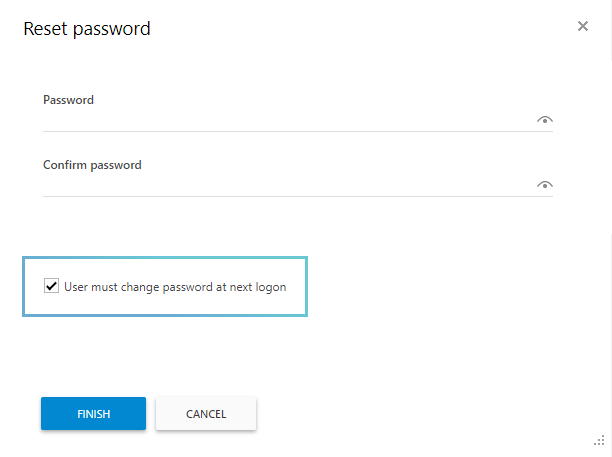 You can now change any texts throughout the entire Web Interface or add a translation to any language.

Multiple account and password statuses can now be displayed next to the objects’ pictures in lists and when viewing individual AD objects.

In addition to disabled and expired accounts, Adaxes can now indicate locked out accounts, those with an expired password or a requirement to change the password at next logon and the accounts or passwords that are about to expire within a given time range.

Adaxes now provides a Common Sign-In page, allowing users to log in to different Web Interfaces from one place. It significantly simplifies giving out the Web Interface link to users, as you can pass the same URL to them all. 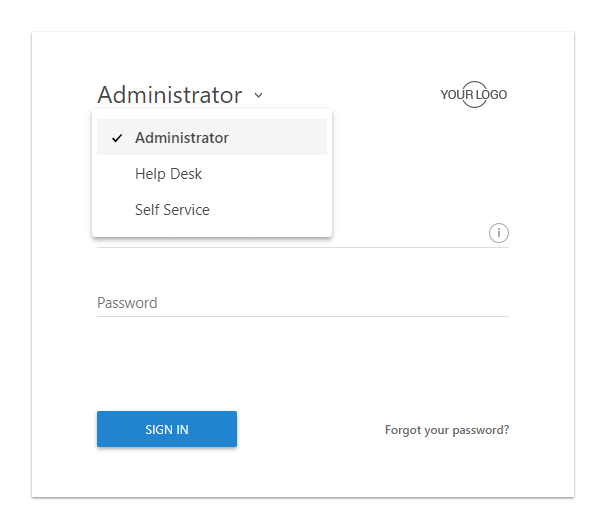 You can configure the Common Sign-In page to either automatically redirect users to the required Web Interface according to your rules, e.g. based on group membership, or allow them to manually select the Web UI to sign in to.

Learn how to configure Sign-In settings 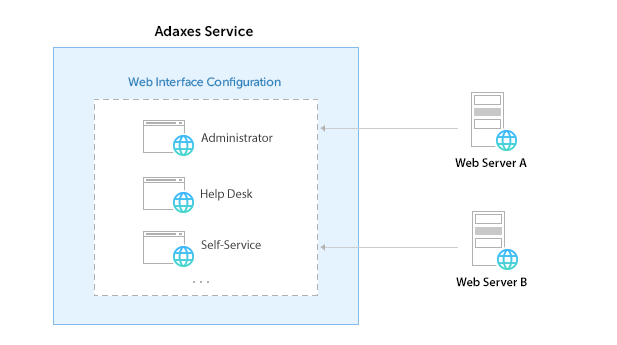 The Configurator for the Web Interface is now web-based. It comes with a new comprehensive UI, which provides intuitive navigation across all settings that are now available on a single page. 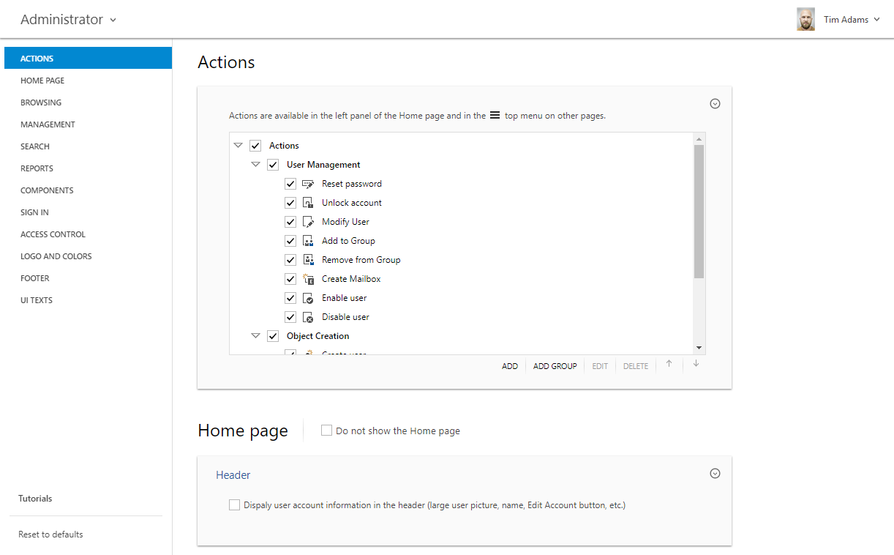 With Adaxes 2018.1 we’re introducing a game-changing reporting platform, which brings monitoring, auditing and analyzing capabilities to a whole new level. Out of the box you get more than 200 built-in reports that can be accessed either from the Web Interface or Administration Console. 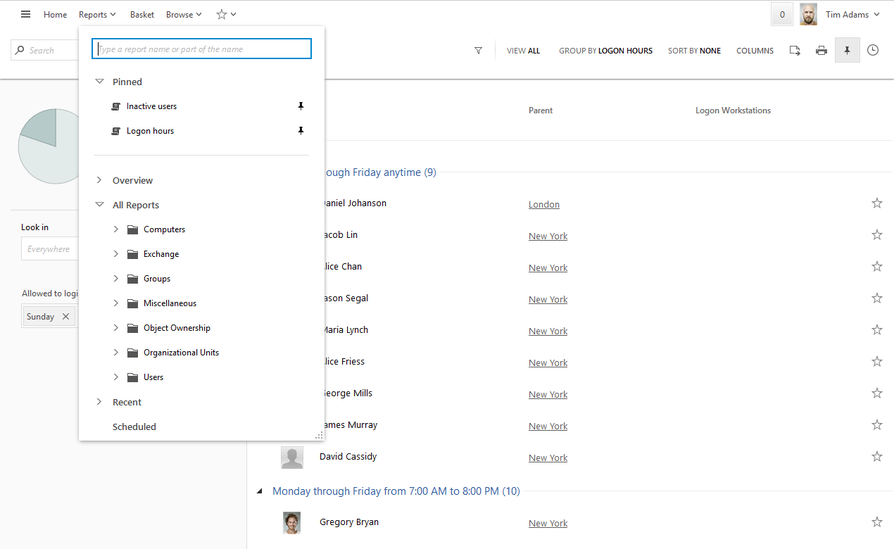 In addition to the 200+ pre-configured reports, you can create your own custom ones. Adaxes provides you with various ways to do that, including using your own scripts. This way you can create reports of practically any complexity that can be specific to the needs of your organization. 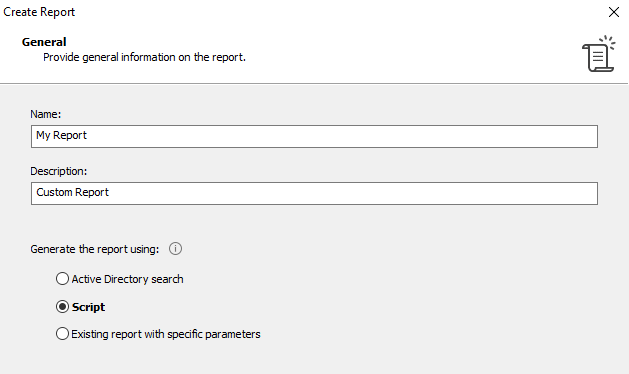 Learn how to create reports

Adaxes supports centralized scheduling of reports, allowing you to choose, which users should get which reports when. Alternatively, you can let your users choose by themselves the reports they want to receive regularly with a self-scheduling option. 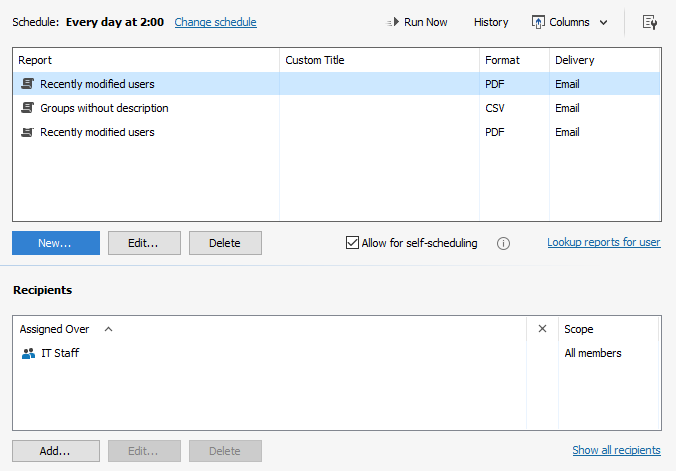 Learn how to schedule reports

With Report Overviews you can combine charts from different reports into a single view. Out of the box you are provided with built-in report overviews, like Risk Analysis, AD Cleanup, Exchange, etc. but you can also create your own ones based on the reports of your choice. 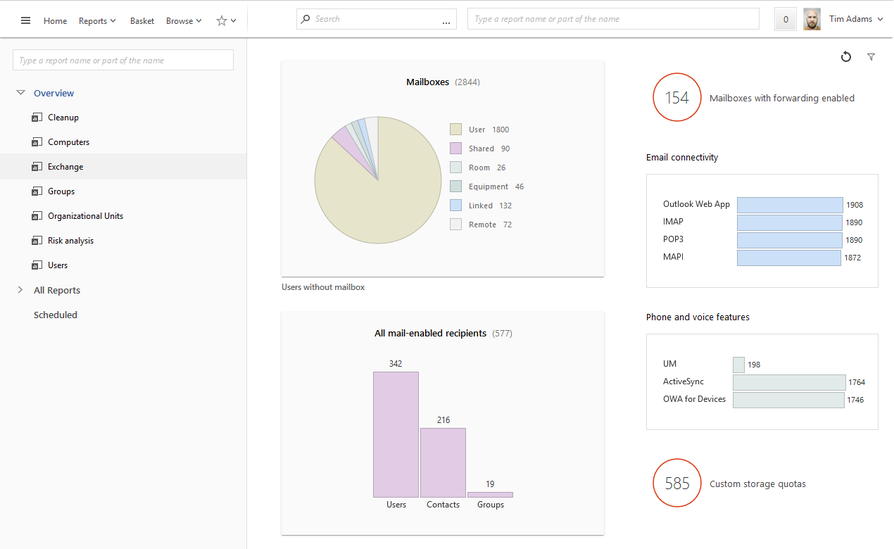 With the latest version we’re also introducing several new features, all of which could be a headliner of their own update. Here’s what you need to know.

Adaxes now supports restoring deleted objects. It allows you to do that either from the Adaxes Log or from corresponding reports. For example, you can restore objects from the ‘Recently deleted objects’ built-in report. Adaxes also allows you to restore deleted configuration objects, such as Business Rules, Scheduled Tasks, Custom Commands, etc.

When accidentally deleting an Active Directory object using Adaxes, you can now use the Undo option that is available in the Web Interface and Administration Console.

How to restore deleted objects

Else and Else If Statements in Conditions

Else and Else If statements can now be used when setting up conditions in Business Rules, Scheduled Tasks and Custom Commands. This way you avoid duplicated conditions and keep them easy to manage and maintain. 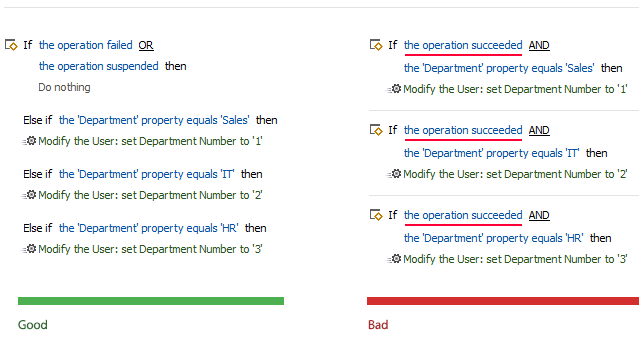 Setting Policies for Skype for Business

Adaxes now allows you to automatically assign policies when enabling new users for the on-prem Skype for Business.

Adaxes now supports formatting and UTC conversion for dates in value references. This allows using custom date formats, like 'Mar-17' or '13:10:00’ and use date value references in LDAP filters. For example, now you can create a Business Unit that will contain users created during the last 24 hours or users whose account expires in less than 2 weeks.

If custom descriptions are specified for actions in Business Rules, Scheduled Tasks or Custom Commands, they will also be displayed in approval requests. 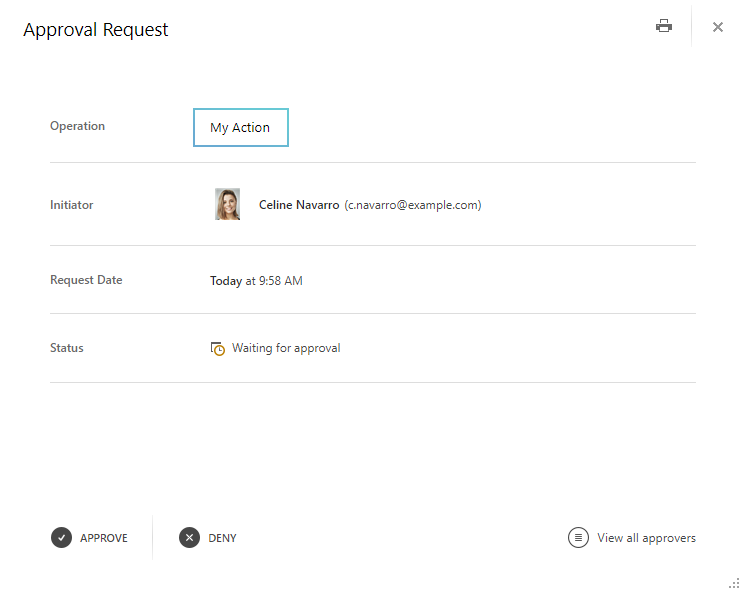 Managing property display names in Adaxes is now done in a centralized manner. Instead of manually changing them on every computer that Adaxes is installed on, you can now do it in a single place via a new UI that is provided in the Administration Console. 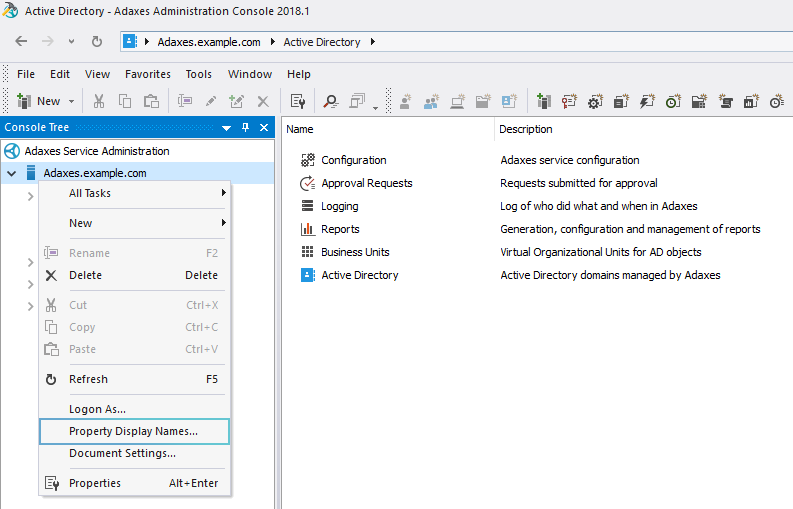 You can now specify default column setting for Business Units. It allows you to define, which columns users will see when viewing the Business Units as well as how the objects will be sorted and grouped by default. 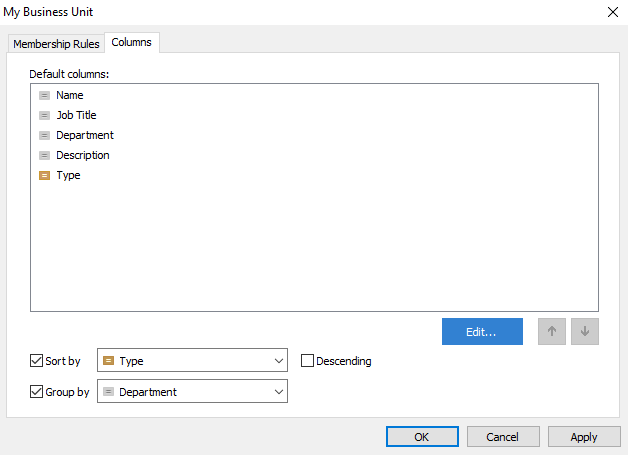 You can now explicitly specify the execution order of Business Rules that are triggered by the same operation. 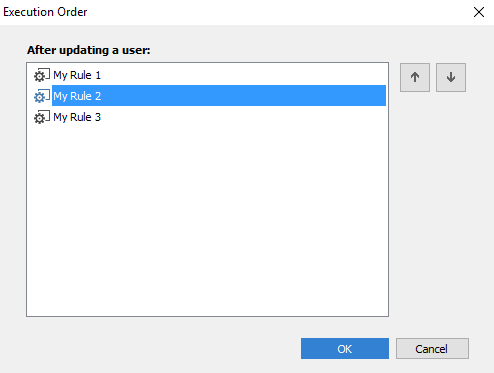 With the 2018.1 update we didn’t forget about the people who administer Adaxes and added some sweet improvements to the Administration Console to enhance the user experience. 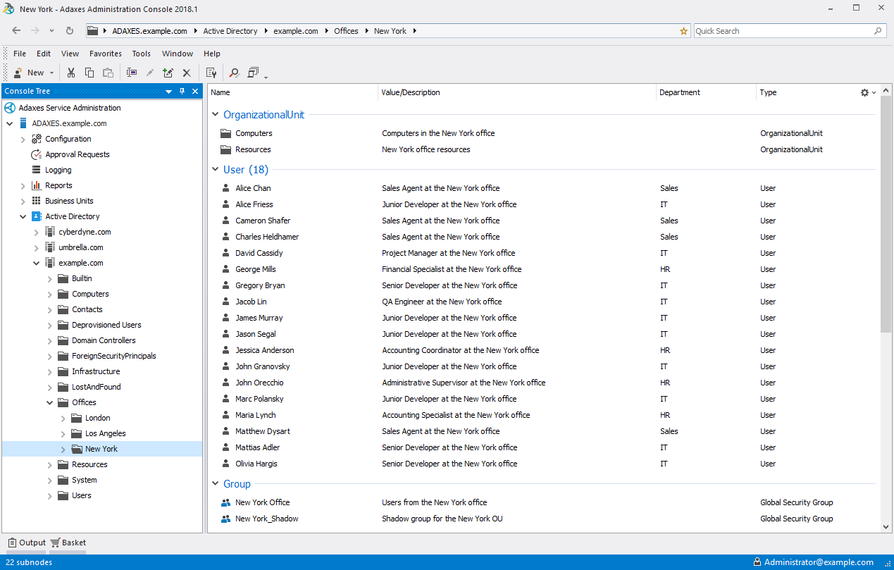 With the latest version we’re introducing an improved interface for working with properties in the Administration Console. The Properties Dialog now has a more intuitive and easy-to-use design with tabs on the side 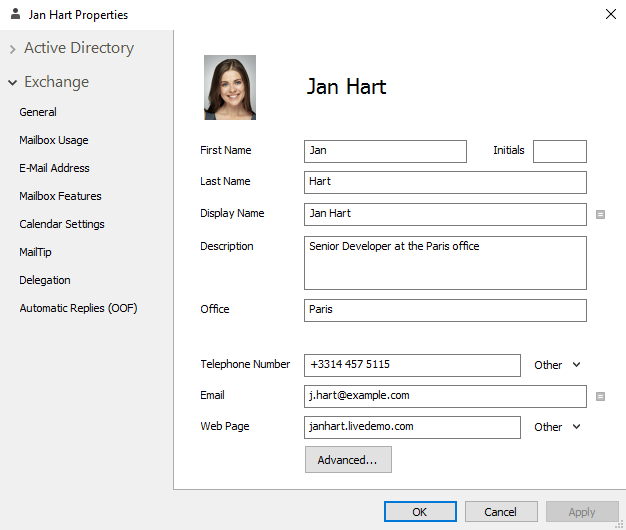 We’re also introducing a new Properties Pane that allows you to quickly view and edit properties of objects with less clicks required. 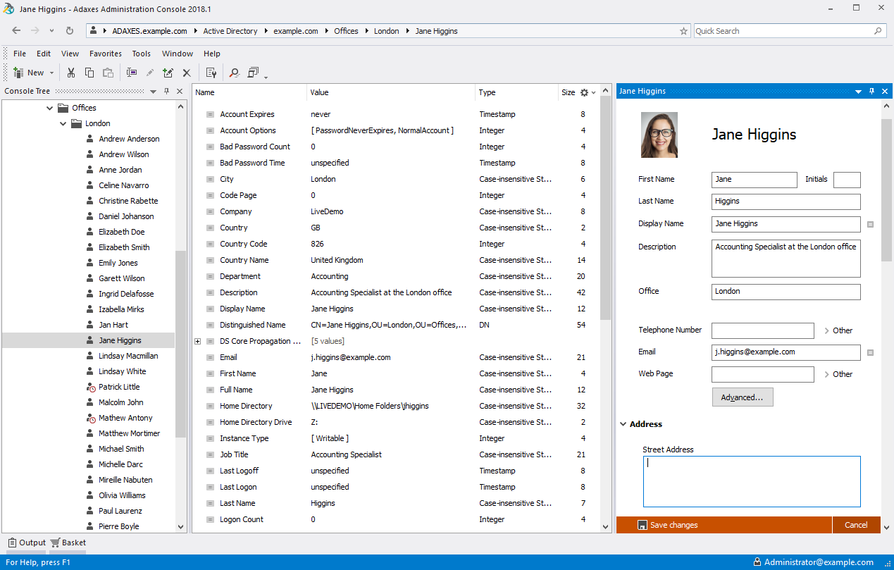 An improved UI is introduced for executing operations in the Administration Console. It is particularly useful for bulk operations that can now display progress for each one and conveniently show any errors or warnings. 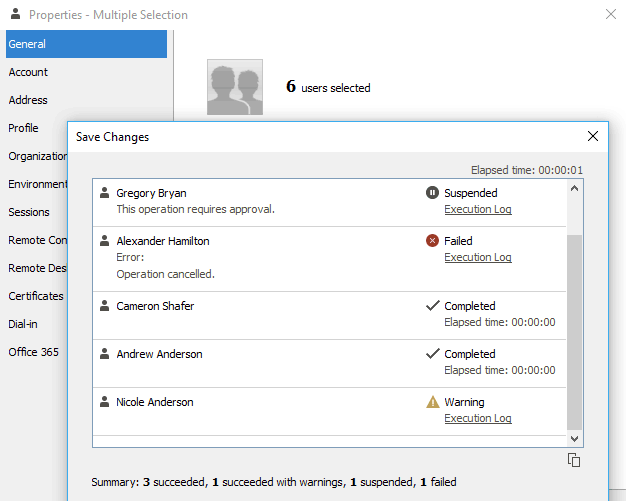 When importing objects via CSV, Adaxes now understands dates in various user-friendly formats like 6/17/2018 or October 4, 2022. Also, the Import Data wizard is now improved with a cleaner and more comprehensive UI. 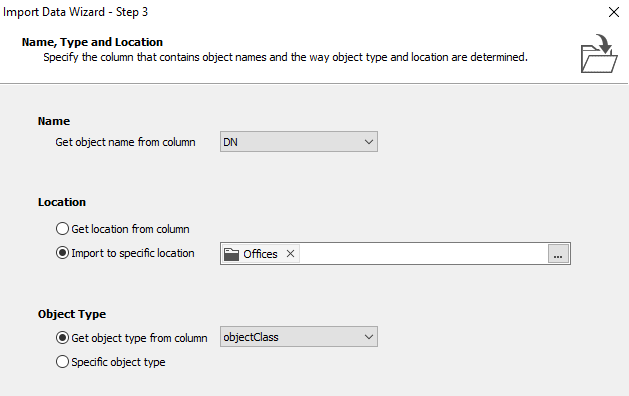