This release introduces the much awaited support for SAML-based single sign-on, adds a bunch of new features for Exchange, extends the automation capabilities of Adaxes and includes a long list of usability enhancements for the Web Interface.

By using SAML authentication you can integrate Adaxes with your corporate identity provider to enable single sign-on for the Web Interface. SAML-based authentication allows users to sign in with the same authentication mechanisms that you use within the rest of your organization.

Adaxes can communicate with any identity provider that supports SAML 2.0, including Okta, OneLogin, Auth0, Azure AD, Duo, ADFS and others.

Exchange management and automation was one of the core areas we focused on for this release. We have added support for new mailbox types, enhanced the management of permissions in Exchange, improved mailbox provisioning and deprovisioning, introduced many other new features and enhancements.

The new version adds support for room and equipment resource mailboxes. For example, using Web Interface and Administration Console it is now possible to view or change how a room mailbox handles meeting requests, who can accept or decline booking requests, when the room can be scheduled, how long it can be reserved, etc.

Using Business Rules and Scheduled Tasks you can automate the management of resource mailboxes, and with the help of Custom Commands you can create a simplified user interface to let users quickly and easily perform complex operations on them with just a few mouse clicks.

With Adaxes you can manage room and equipment mailboxes in both on-premises Exchange and Office 365 (Exchange Online).

It is also possible to convert mailboxes automatically using Business Rules, Scheduled Tasks and Custom Commands. For example, you can add the Convert to shared mailbox action to the list of the offboarding procedures executed by the Deprovision command. It can be especially useful when a mailbox is hosted in Office 365 and you want to have it available after all the Office 365 licenses have been removed from the user.

To simplify the management of shared mailbox permissions, we have added the Mailbox Members section where you can view and modify the list of users who can access the shared mailbox. 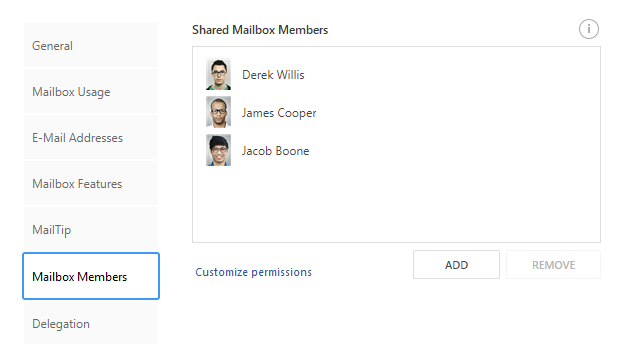 The new version fundamentally changes the way you work with linked mailboxes in Exchange. You no longer need to manage master user accounts and the mailboxes they are linked to separately. Now, if a user account has a linked mailbox, all the Exchange properties and operations are available for the user account, as if it had a regular mailbox.

Also, now you can create linked Exchange mailboxes automatically from within Business Rules, Custom Commands and Scheduled Tasks. For example, you can create a linked mailbox as a part of the user provisioning process in a Business Rule triggered after user account creation in Active Directory.

Changes applied to the Out-of-Office feature include three additional options available while configuring automatic replies for a user: 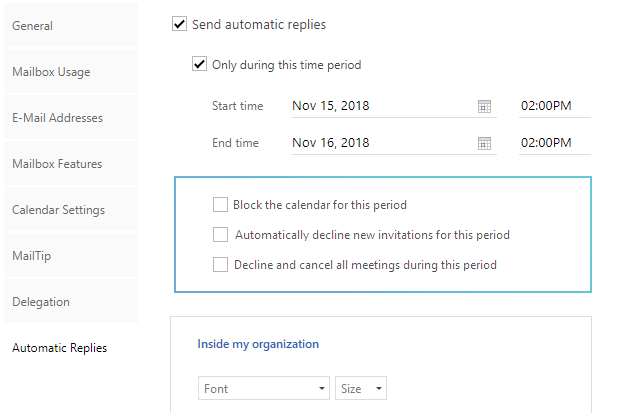 The new options are supported by Exchange 2019 and Office 365 (Exchange Online) only.

Cancel meetings organized by a user

The feature is supported for Exchange 2019 and Office 365 (Exchange Online) only.

We've also added the ability to set calendar permissions for users in Exchange and Office 365. It can be done both manually via user interface and automatically via Business Rules, Scheduled Tasks and Custom Commands. 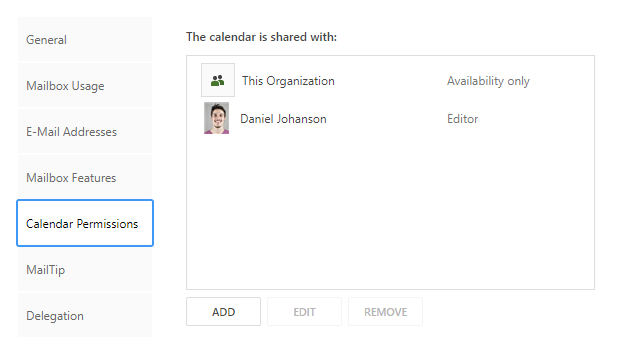 The latter option enables you to, for example, automatically grant the Delegate permission to the user's manager as a part of the deprovisioning process.

After you upgrade to the new version, the Calendar Permissions section will be disabled in the Web Interface. For details on how to enable it, see Customize forms for user creation and editing.

Now, using Adaxes you can manage the mobile devices that are used to access Exchange mailboxes in your on-premises Exchange and in Office 365. 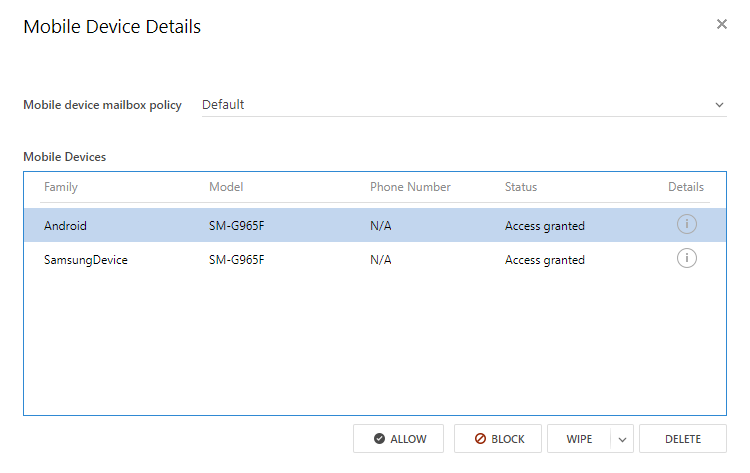 After you upgrade to the new version, the Mobile Devices feature will be disabled in the Web Interface. For details on how to enable it, see Customize forms for user creation and editing.

Now you can enable or disable the mailbox auto-mapping feature for users who have Full Access permissions to a mailbox. When auto-mapping is enabled for a mailbox, Outlook automatically opens it in addition to the user's own mailbox. 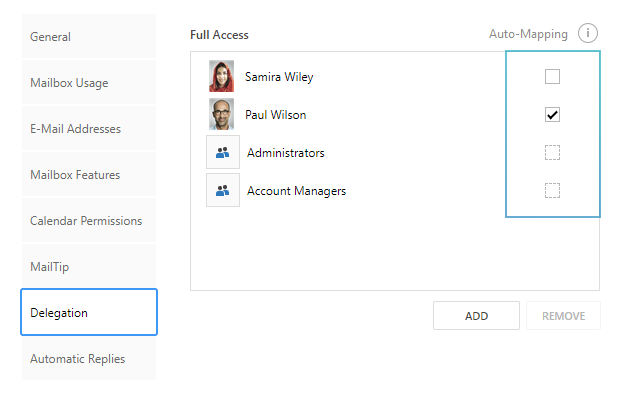 Now you can configure the Full Access section not to display the users and groups with the full control permissions granted at the mailbox database level. By default, such permissions are granted to Exchange system groups, like Exchange Servers and Exchange Trusted Subsystem.

It is now possible to configure the visibility of each Exchange operation individually. For example, now you can remove the Exchange properties operation from an object view, if the view contains the Exchange Properties section.

Now you can configure what to display in the Exchange Properties section separately for each recipient type. For example, you can leave the Alias field for user mailboxes and hide it for groups and contacts.

In the new version we have added a bunch of new features and improvements to make the Web Interface even better and more user-friendly. Here are the main highlights.

We've redesigned the majority of dialogs in the Web Interface to make them more convenient to use. Now the dialogs occupy the entire height of the screen, which is especially handy when working with long forms and lists.

Members, Member Of and Child Objects

We have increased the default height of the Members, Member Of and Child Objects sections and added the ability to resize them. Also, now it is possible to group items and add columns to the sections.

We have made the left pane and sliding bars in the Web Interface resizable. This capability can especially be useful for those users who have Custom Commands and actions with long names.

The Quick Search bar in the Web Interface and Administration Console now has search history that pops up every time you set focus to the search box. It allows you to navigate to the objects that you have searched previously in just a few mouse clicks.

Also, now you can open search results in a new browser tab.

Objects displayed in the Members and Member Of sections are now sorted by name by default.

Now, users can switch what to display in the mousover popups - object path or object description.

Also, we've added the ability to configure what information to display in the popups individually for each object type, and now you have the option to disable the feature completely or only for specific types of AD objects.

Adaxes Web Interface allows users to quickly select and filter objects in lists with the help of the predefined filtering options available from the Select and View menus. In the new version you can configure which options are visible to users, change their order and specify which ones you want to be hidden under the More menu.

Now it is possible to modify user pictures right from object views, without the need to switch to the Edit mode. 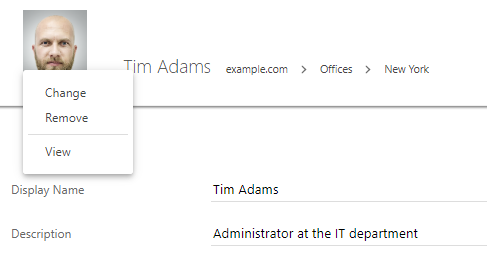 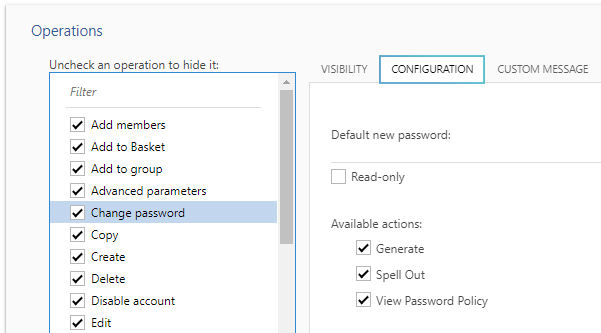 Access to Web Interface Configurator is now allowed only to users who have the permissions to modify the configuration of the Web Interface.

We have added the ability to copy actions in the Web Interface Configurator. 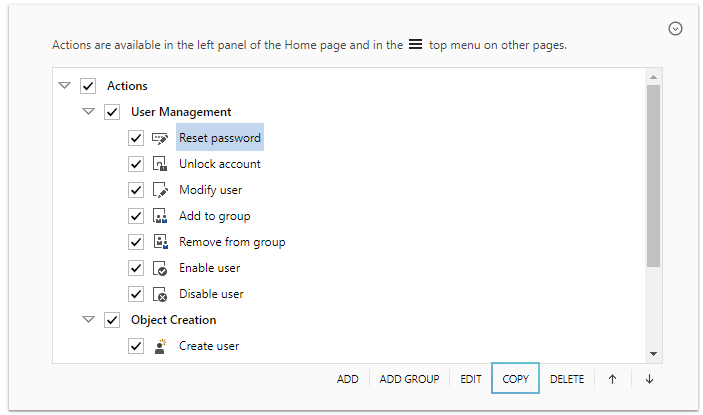 The new version gives you the ability to automatically create Active Directory objects, introduces three new conditions and enhances the Enable for Skype for Business action for automated workflows.

Using the Create an Active Directory object action you can now create AD objects from within Business Rules, Custom Commands and Scheduled Tasks.

In the new version we have added the following three conditions:

We've added the ability to assign the Dial plan and Voice policies when enabling users for Skype for Business.

This update extends the previous security update and addresses the same vulnerability. The previous fix can be bypassed, which was discovered recently. As a result, we've reinforced the fix by escaping all possible double quote characters ("„“”) when value references are resolved.